Polish movies and TV series are becoming more and more popular and recognizable in the world of cinematography. The movies presented below had a wide appeal and broke viewership records in Polish cinemas. The most popular Polish movies on Amazon Prime have English subtitles so you can watch them all and understand better this part of Polish culture.

We have selected our favorite Polish movies (and one TV series) available on Amazon Prime. Have fun!

If you’re an Amazon Prime member, you can stream these Polish movies (excluding ‘The Teacher’ and ‘The Pack’) for free.

Breaking the Limits is the award-winning biopic of Jerzy Gorski, an alcoholic and drug addict, who, despite all odds, turns his life around to become the winner of the Ironman Triathlon. Featuring a Polish all-star cast, the film depicts Gorski’s battle with addiction and arduous training sessions against the backdrop of the 1970s and 80s communist Poland.

Bogowie is an incredible story about Polish cardiologist who challenged nature, the regime and his own shortcomings.

It is a film about the first successful heart transplant in Poland performed by Professor Religa in Zabrze. The movie shows the tragedy of failed surgeries, fight for every single heartbeat, and grand ambitions. The film perfectly reproduces everyday life in Poland during the communist era.

A moving story of a young Polish couple who struggles with financial difficulties and family problems after the developer who was supposed to build their apartment and to whom the couple paid all their money goes bankrupt.

Based on true story. Polish army colonel, Ryszard Kuklinski, had access to top secrets of Warsaw Pact forces. He discovers that the American nuclear counterattack against Soviet forces is planned to be executed in Poland. Kuklinski, with iron-clad determination, starts a long, lonely, and psychologically exhausting cooperation with CIA.

Cold War is an award-winning, passionate love story between two people of different backgrounds and temperaments, who are fatefully mismatched, set against the background of the Cold War in the 1950s in Poland, Berlin, Yugoslavia, and Paris.

The movie was directed by the Academy Award Winner Paweł Pawlikowski. The main roles in the film were played by one of the best Polish actors – Joanna Kulig and Tomasz Kot.

A Polish teacher moves to a provincial town and gets involved in investigating the brutal murder of a high school girl. He learns more and more about the mysteries of this murder, revealing corruption and fraud among local elites. 1st season of the Teacher series is available to Amazon Prime.

Ida won the Oscar in 2015 for the best non-English movie and it is the second movie directed by Paweł Pawlikowski on our list. This black and white drama with a small amount of dialogues tells the story about a young novitiate nun in the 1960s Poland who makes a shocking discovery about her past.

Katyń is a heartbreaking movie that cannot be quickly forgotten. The movie directed by Oscar-winner Andrzej Wajda, tells the story of the massacre of Polish soldiers in Katyń in 1940 by the Soviet army. The second part of the film describes the persecution of families of murdered soldiers who fought to know the truth about their husbands, fathers, and brothers.

Wataha is one of the most popular Polish TV series of recent years. It tells a story of border guards in the Bieszczady Mountains. The story starts with a bomb attack which kills officers from a Border Guard. The only survivor, captain Rebrow, tries to get to the bottom of the assault and find out who is the mastermind behind the bombing.

The series tells the story of people on the external border of the European Union and offers a rare glimpse into the stories of people who illegally cross the border.

You may also like:
Best Polish souvenirs
Autumn in Poland

We are backpackers from Lower Silesia region in Poland. After 10 years of traveling as a couple, we are now discovering the world with our baby. BackpackersWro is a place where we share our itineraries and tips for well-organized, affordable, and sustainable travels.

This site uses Akismet to reduce spam. Learn how your comment data is processed. 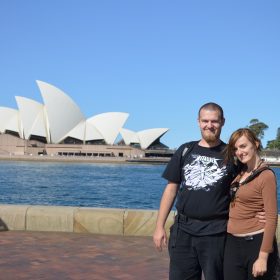 We are Marta & Milosz, backpackers from Poland. After 10 years of traveling as a couple, we are now discovering the world with our baby. BackpackersWro is a place where we share our itineraries and tips for well-organized, affordable, and sustainable travels.
Tag Cloud
1-day itinerary 2-day itinerary baby travel Christmas food interesting facts things to buy things to do traveling on a budget
Top Posts